54th October Salon – No One Belongs Here More Than You

5.30 – 6.30 p.m. – CCB team walks you through the October salon, CCB team (high school and university students) organises guided tours for their peers (and other interested parties)

7 p.m. – Lala Raščić, Whatever the Object, performance and closing of the 54th October Salon

Next week in Belgrade an exhibition guide No One Belongs Here More Than You will come out, offering documentation on works and artists presented at the 54. October Salon.

In 2014 an exhibition reader will follow with de-construction of the exhibition, its reception and discourse as well as contributions generated in the framework of the curatorial schools which took place at the 54. October Salon.

“In this performance I will recite my poems from the collection Črni dudi moga dida, written in the 80s, in the BOSANČICA tone. The poems were published in a literary magazine (Književna revija) a few months before the beginning of the war in Yugoslavia. In medieval Bosnia, depending on the rulers, the men spoke and wrote different languages: old church, Latin, Turkish or the Arabic language and its alphabet, alhamiado, or languages brought by Jews – but women wrote in the women’s alphabet and in the Bosnian language. Thanks to women’s script and its clarity, convenience and ease, today we have a new alphabet – written Cyrillic. What is to be admired here is this phenomenon of a women’s script, in the Bosnian language, also known as Bosančica, being entirely left to women for their correspondence as their right, their secret and their code. I entirely devote this performance to our curators Red Min(e)d.” (Alma Suljević)

Alma Suljević is a contemporary artist from Bosnia and Herzegovina. She graduated from the Academy of Fine Arts in Sarajevo, the Department of Sculpture, and finished her post-graduate studies in the field of the contemporary philosophy at the University of Sarajevo. Since 1997, she has been teaching at the Academy of Fine Arts in Sarajevo, where she lives and works. Alma’s work mostly reflects on topics of war, women and feminism.

“My work is a trans-disciplinary exploration of narrative and the means of delivering it. Rooted in the visual, I am fascinated by words, by the literary, written, spoken: performed. I am not concentrated on a single subject, more often the departure for every new project is a serendipitous find that takes me to journey of discovery through research. Very often my work takes the form of installations, videos and objects, which in correlation form a narrative thread, with the central axis of my projects being performance. My definition of performance is broad; it can be spoken text, video or live performance. My concern is with constructing worlds that communicate with fantasy and reality, but are subverted by a critical approach and contextual readings. For the 54th October Salon, I have been invited to deliver three performances on three consecutive days. I will be performing The Damned Dam, Travel in the Box and Whatever the Object. Each of these performances will be a new, unique rendition of a former project.

The Damned Dam will be the first time I perform, in English, the text from the project originally produced in 2010 as an oral storytelling performance and video performance. The new English version of The Damned Dam exists only as an audio work, produced in 2013, in which I am accompanied by a “saz”, a traditional string instrument. In this last version, the original spoken text, in my native tongue, is carefully translated into English as an epic ballad teeming with alliteration, rhyme and evocative poetic imagery. The story is set in the near future and follows two characters as they battle social injustice and environmental disaster, inspired by motifs from Bosnian oral storytelling traditions.

Travel in the Box is a work, which since its conception, in 2007, has been undergoing transformation each time it was presented. Originally developed as a video performance for a frieze of 22 monitors in foyer of the Threshold Artspace in Perth, Scotland, the work has morphed not only in the medium, but also in content. It’s most ambitious realization was for City of Women, Ljubljana in 2009 when I commissioned several poets and poetesses to write verse on the topic of travelling in a box, inspired by two stories of persons that shipped themselves in a box, in search for a better world. One refers to Henry “Box” Brown, a slave that shipped himself to freedom in 1849, and the other story is of Charles McKinley, a man that stowed away in a box because he was homesick in 2005. In Belgrade I will deliver a lecture performance that maps the versions of the project and interpret the poems I have collected.

Whatever the Object is based on a three channel video installation produced in 2013. Whatever The Object explores the notions of translation and transmutation. I will perform the script originally written for three actresses. It is based on three found pages of an unidentified book, analyzed as an object and a source of meanings. The script follows an almost forensic analysis of the found pages, their content, and their physical properties, concentrating specifically on one sentence singled out from the text because of its cryptic nature. The said sentence is translated and thus re-interpreted through translation into Croatian, English and German. Numerous versions of its translation explore it linguistically, opening the space for the speculation of its meaning, which is in turn deconstructed through the repetitive verbal interpretation of the sentence in the three languages.” (Lala Raščić)

Lala Raščić was born in Sarajevo, Bosnia and Herzegovina. She has received her art education at he Academy of Fine Arts, Zagreb. Her works spans installation, video, performance and painting. She had been an artist in residence at the Rijksakademie, Amsterdam; Platform Garanti, Istanbul; Cite des Arts, Paris and Kultur Kontakt, Vienna, amongst others. She has exhibited extensively internationally and in the region. In 2013 she was the recipient of the Future of Europe Art Award, Alpha2000 and is shortlisted for the Henkel Art.Award. Recent solo shows include No Country Other Than Liberty, SIZ, Mali Salon, Museum of Contemporary Art, Rijeka (2013); Whatever the Object, GfZK, Museum of Contemporary Art, Leipzig (2013); A Load from the Inside – Reviewed, Sigmund Freud Museum, Vienna (2011) and The Damned Dam, POGON, Jedinstvo, Zagreb (2010). Her works are a part of both private and museum collections in Sarajevo, Zagreb and New Orleans. Lala spends her time between Zagreb – where she is the member of HDLU and HZSU artists’ associations; Sarajevo – where she is the board member of the Association for Culture and Art CRVENA; and New Orleans – where she is a member the artist-run gallery Good Children.

Blossoming sprouts plant greenery on soil, imbibe spaces, settle in cracks, and further grow and thrive. Ill weeds (ger. „unkraut“) go apace, they seize their territory and prove to be much more resilient than many crop plants.
Weeds? Weed out culture? Weed out krauts? Un-kraut? Off the beaten green track, we dedicate ourselves to the herbaceous, to the rambling, to the crowds uniting krauts and non-krauts, to the open, to the unpredictable. Throughout the past years we’ve constantly been working on breaking open the confines between art and life, on testing novel forms of life, and on supporting innovative artistic work. We grow – in all senses and directions, in order to let utopian potentials grow rampant.

*Artist talk will be in English

Alban Muja (born in Mitrovica on 10. September 1980) is a Kosovo-based visual artist & filmmaker,currently lives in Prishtina, having graduate BA & MA from the Faculty of Fine Art in Prishtina.

His works cover a wide range of media including video installation, short film, documentary film, drawings, paintings, photographs and performance, and have been exhibited extensively in International exhibition, in festivals and shows including personal presentations as well.

Mostly influenced by the social, political and social transformation processes in Kosovo and the surrounding region, he investigates history and socio-political themes and links them to his position in Kosovo today.

You can visit his exhibition called ‘Naming’ in ‘Java’ contemporary arts gallery in Sarajevo (Java Galeriji za savremenu umjetnost) until 22. April 2013., every day except Sunday, from  12 – 20h.

With this exhibition, artist presents to Sarajevo his photos, videos that deal with different aspects of naming politics in transitional society. 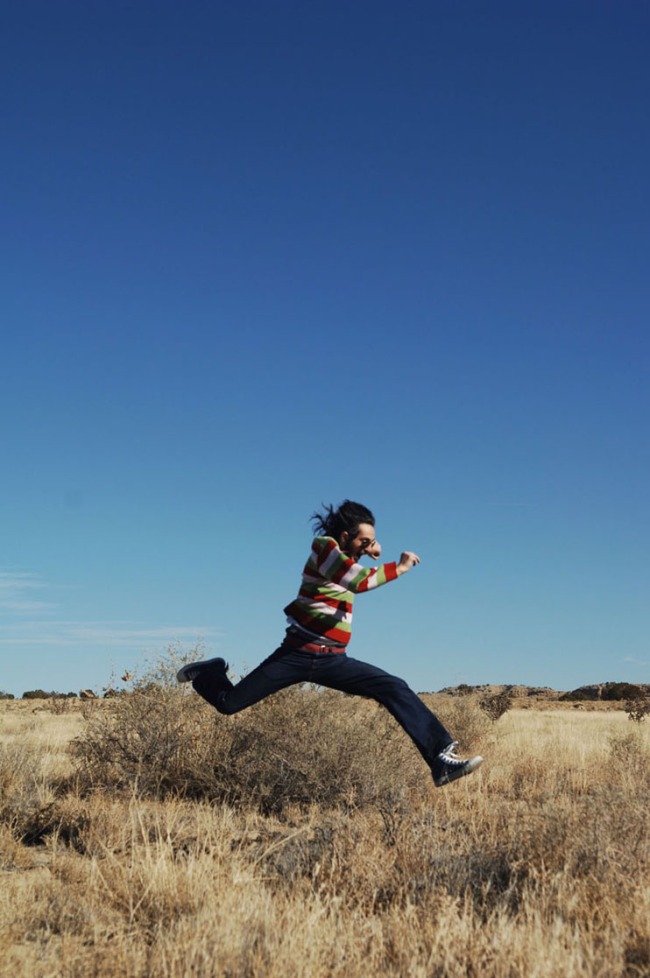 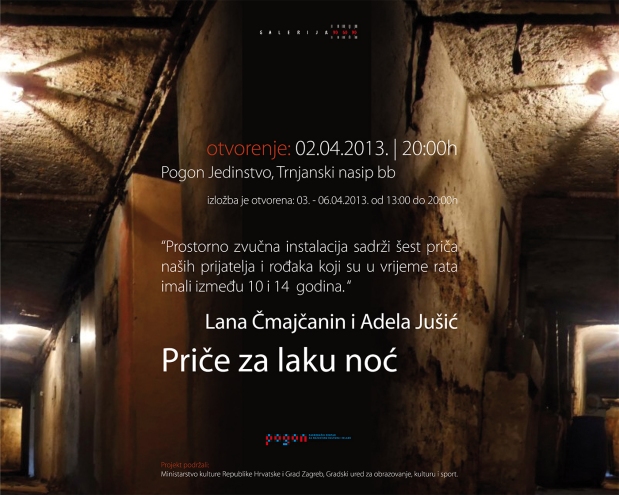 Red (CRVENA in bhs language) is the color of blood and fire, strong emotions, love and color of alarm. Color red is considered to be the only proper color, being the first color humans have discovered. Red is also a color of power and energy we feel every time we work together. Precisely for these reasons, 10 women gathered around the original idea for the establishment of the organization on the 8th March 2010 and opted for the name CRVENA (RED). Exactly one hundred years ago and three years following the International Conference of Women in Copenhagen where at the proposal of Clara Zetkin decisionon the celebration of 08th March was adopted, 2000 Bosnian women of all faiths have celebrated International Women’s day in Sarajevo. On our third birthday and in honor of those who have fought for our rights and freedoms we decided to mark this 8 March 2013, by asking ourselves: What has our struggle given us? 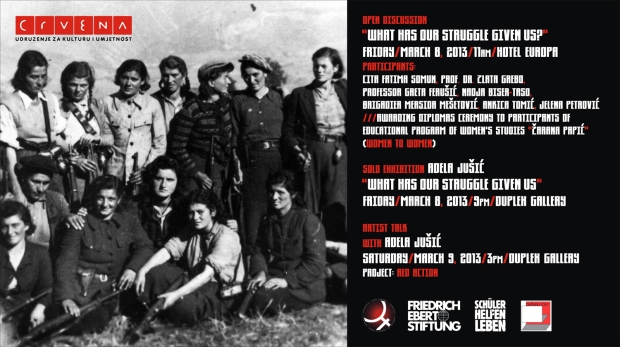 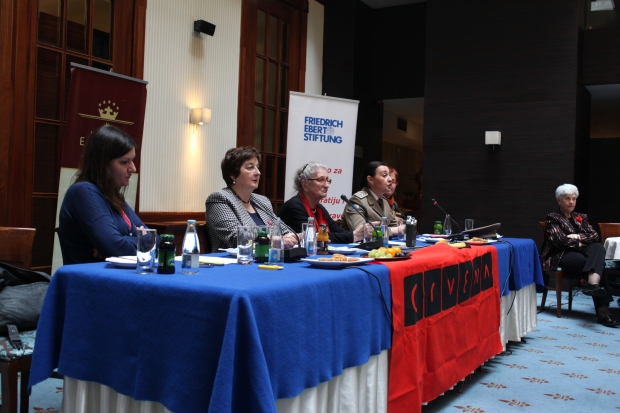 Project The Bring In Take Out Living Archive (LA)